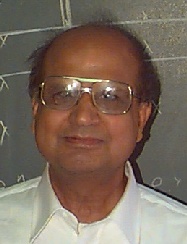 B B Bhattacharyya profile photo on NCSU Department of Statistics website, accessed 21 Feb 2019.
Dr Bibhuti Bhushan Bhattacharyya was born on 1 August 1935 at Bhatpara Municipality, West Bengal, India.1 He died on 20 February 2019 at age 83.
He earned a B.S. at Presidency College and a M. S. at Calcutta University..2 Bibhuti traveled to Liverpool, England on 20 September 1956 He came from Bombay, India to study at the London School of Economics and Political Science..3 He earned a Ph.D. in Econometrics 1959 from the London School of Economics and Political Science.2 He was employed by North Carolina State College circa 1961 as a Visiting Associate Statistician of Experimental Statistics. He was employed by the North Carolina State University Dept. of Statistics from 1963 to 2007 as a professor of Statistics. From 31 December 1973 to 29 January 2014 Dr Bibhuti Bhushan Bhattacharyya owned a residence at 3325 Horton Street, Raleigh, Wake County, North Carolina. He was naturalized on 22 March 1978 at Raleigh, Wake County, North Carolina; 2nd witness: John O Rawlings.1 Bibhuti was honored in 1985. The N. C. State University Department of Statistics presented him their Dr. D. D. Mason Faculty Award in 1985-86 for his 25-year commitment to the graduate program and its students and his contributions to the research programs of his colleagues.. Bibhuti was honored in 1986. The N. C. State University Alumni Association gave him an Alumni Distinguished Professorship award of $4,000 for outstanding teaching.. Bibhuti retired from the Department of Statistics in 2007.